Disappointed with the returns on your PPC spend? | nv8v

Still spending on adverts, still getting clicks, but low returns?

Still spending on adverts, and getting clicks, but low revenue?

Here’s the thing, you won’t find many advertisers or agencies giving you this good advice, but let me tell you:

“It is not in the interest of any platform, not Google, Facebook, Pinterest or anyone to worry about whether you are paying for too many clicks.”

A new person who joined the team a few weeks ago was shocked to hear me turning down one potential client after another because they wanted to spend money on gaining likes. We refuse this business because this will not grow into a happy and profitable relationship for us. It will most likely end up in a cancelled advertising account and as you probably know, nobody ever blames themselves, so the risk is simply too high for us

A recent report from Google themselves claimed that for every dollar spent by clients they get back two dollars. That amounts to a spend of 50% of revenue on marketing and very few businesses could survive on that for very long.  Likewise the global average click through  rate of below 2% won’t be feasible for most businesses, but thankfully averages are for average people they don’t tell you very much of value in many scenarios and this is one of those scenarios.

Tens of thousands of businesses generate leads at 10% or lower of revenue and many businesses with global reach rely entirely on PPC advertising.  Many advertisers including yours truly achieve clicks through between 10% and 24%, I’ve heard about higher rates.

While we are doing statistics, this may help explain why there is such a big disparity. For every £72.00 spent on advertising, only £1 is spent on conversions. Sadly there is no mild way to put this, the pros are wining big and the amateurs are paying a big price, the sum of these two makes up the average which as is so often the case, is an utterly useless and misleading statistic.

Of-course there are other reasons too, for example businesses with a strong brand are bound to do better from any advertising campaign. Well written adverts, well placed adverts, better landing pages and a host of other things all have a significant impact, but there is one move you can nearly always make that will start turning more visitors into customers and teach you more about them in the process.

Move your focus up the funnel 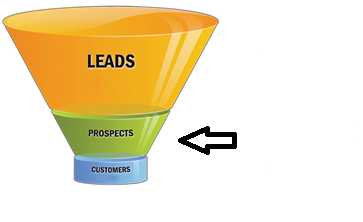 By setting out to generate a prospect rather than get an immediate sale, you give yourself a far greater chance of engaging. In the process of doing this, you will learn a great deal about what motivates your prospects and learn how to convert them better.  You might even improve your proposition.

You may for example discover that they are at an earlier stage in the process when they visit than you had assumed. The solution might be to adjust your content to match their need, or adjust your advertising strategy to attract prospects at a more “transactional” stage in their journey. Each scenario is different.

Furthermore, if you learn how to run drip mail campaigns or to do it better and utilise remarketing fully, you can build deeper relationships over time that yield a higher return from your advertising spend than one-off sales might and develop your understanding of your market better in the process.

It’s down to you how you define a prospect, but generally she has shown interest and will probably have met one or more other requirements that suggest more than a random fleeting interest. Most of us would prefer, if possible, to only be engaging with people who want and welcome the extra attention or communication and of course a part of that is establishing a degree of trust that you will respect the prospects wishes at all times.

This latter concept is one that many people struggle with, especially amateurs i.e. the difference between positive targeted marketing that is focused on selling your product rather than share of voice and pushy annoying marketing that intrudes and upsets all of us when we encounter it.
The difference of course is targeting the right people to begin with and then communicating two ways, not just broadcasting noise.

Get our free guide to utilising funnels in your marketing strategy

Get a  free audit of your PPC campaigns and see where improvements might be made.